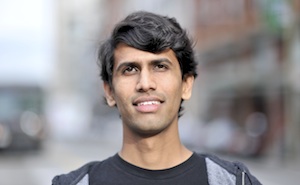 James, Andrew, Sara and I are back from ng-conf -- and we all had a blast! The conference was very well put together (kudos to Domo) and it was inspiring to speak with luminaries from across the Angular community in person. Just in time for ng-conf, we released a new version of AngularFire (0.6), deployed improvements to our account dashboard, and announced a new Firebase + Angular quickstart guide. I was also excited to demo on stage how easily you can wire up a backend to your Angular app using Firebase.

Watch this video of my talk on building realtime apps with Firebase and Angular:

The conference started off with an amazing keynote by the creator of Angular himself, Miško Hevery, along with Brad Green from Google. They gave a bit of history behind Angular, how it came to be, where they are today and what their plans are for the future, including how they want to help the community extend the Angular feature set. We were extremely flattered when Miško said in the keynote that Firebase “completes the original vision” of Angular:

After a long day of excellent talks by several preeminent speakers, it was time for the Firebase sponsored party. The party featured a comedian, magician and an impromptu comedy troupe. A spread of desserts was accompanied with our very own Firebase chocolate. We hope everyone had a great time - conferences are so much better when they’re mixed in with a little live entertainment!

We gave away tons of Firebase swag: T-shirts, light-up bracelets, stickers, and of course, our very own hot sauce! We were very happy with all the interest in Firebase, and were delighted to meet everyone who came to our booth with questions, compliments or feedback.

We wrapped up the conference with a day on the slopes with many other ng-conf attendees. It’s one of the best conferences we’ve participated in so far, and we’re definitely looking forward to the next one!