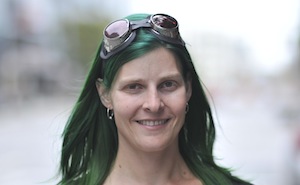 This past weekend Y Combinator hosted a hackathon, YCHacks. 540 developers answered the call. Over the weekend they turned pizza, energy drinks, and APIs into 123 projects.

At Firebase we really love hackathons, so it didn't take much effort to convince about half of the team to attend. This gave us a great opportunity to exchange high fives with developers who use Firebase. It turned out to be quite a few high fives because 34 teams used Firebase including two of the top three prize winners. In fact, so many developers used Firebase, that nearly 4% of the total network traffic was to our API servers.

All of the presentations were impressive, but a couple stood out as the best realtime apps.

Awear combines the Myo gesture detection arm band with Bluetooth location beacons to provide you with a way to control the technology near you by waving your hand. For example, when you're in the living room, a hand gesture might turn on the music, and in the kitchen the same gesture could flip through a digital cookbook.

Awear is a great example of how ubiquitous Internet connectivity is going to change the way devices talk to each other. With so many devices interacting with each other, the team found inter-device communication challenging. At 3:00 AM on Saturday they decided to give Firebase a go. Within a couple hours, all of the hardware was working in harmony. To quote them, "Firebase, you saved our lives!"

Virtual reality makes a lot of new, amazing experiences possible, but the Vrniture team also thinks it can change the way we do some more mundane tasks. Specifically, shopping for furniture. Vrniture used Firebase to wire up 3d models of your room with models of furniture you might like. It then presented a preview on an Oculus Rift so that you can experience new furniture in your home without having to rent a truck.

Those were our favorite examples of realtime development with Firebase, but there was other cool stuff too. A lot of it happened to be powered by Firebase.

High fives keep many of us running. They're an effective way to smack back the things that get us down. But as effective as they are for happiness, they're hard to track. It's hard to know if you've had your prescribed dose.

Quantified High Fives changes all that. It uses the motion sensor in the Pebble smartwatch, and a Firebase to accurately and effectively track your intake of High-5s. It even displays your current count in realtime. Now when you wonder, "Have I had enough?" your Pebble smartwatch and Firebase can tell you.

Tanay Tandon of team Athelas added a hemispherical lens to an iPhone and discovered that the optically enhanced camera was able to image individual blood cells. He then threw OpenCV at in an attempt to identify blood borne pathogens, like Malaria. In other words, he turned commodity electronics into a low cost blood scanner. The scanner app then stores test results in Firebase.

YCHacks was great fun. We really enjoyed seeing all of the ways that people used Firebase, and we can't wait for the next one!