Working with multiple Firebase projects in an Android app Firebase provides a bunch of features to use together in your app, provided by a project that you create at the Firebase console. Normally, it's sufficient to have all your app's resources provided by a single project, but there are times when you want a single app to be able to access data from multiple projects. For example, you may need to access data from two different databases, and be able to authenticate users to access each one. I'll show you how that's done in this post.

A project created on the legacy console, associated with a Firebase Database that has not been upgraded to the new console.

A project created on the new Firebase console. Every Firebase project is also a Google API project underneath.

A client for a specific platform. Each project can have multiple apps associated with it..

One particular scenario occurs for developers who want to upgrade their existing legacy Firebase.com database to a new Firebase project, while also being able to use services from another Google API project. The upgraded legacy project becomes a new Firebase project, and that needs to be used in tandem with the Google API project that provides Google Sign-In authentication for existing users.

The challenge here is that for the Google Sign-In component to work on Android, it requires a SHA-1 (the fingerprint of the key used to sign the APK) and package name (e.g. com.foo.bar) to be registered for the app. This combination allows Google Sign-In to know which Google API project is being used by a particular app. A given pair of SHA1 and Package Name is globally unique within Google (and Firebase projects), so if you try to add the same pair SHA-1 and package name to an upgraded Firebase project, you get an error that the OAuth2 client already exists (in the Google API project):

Warning: If you see this, don't delete your existing client ID for apps in production! This will break your app for your existing users. The right choice is to create a new app with the same your package name in the Firebase console for the upgraded project, but not to include a SHA1.

Now implement Google Sign In with Firebase Auth as normal. At one point you will have to configure your Google Sign Options object: 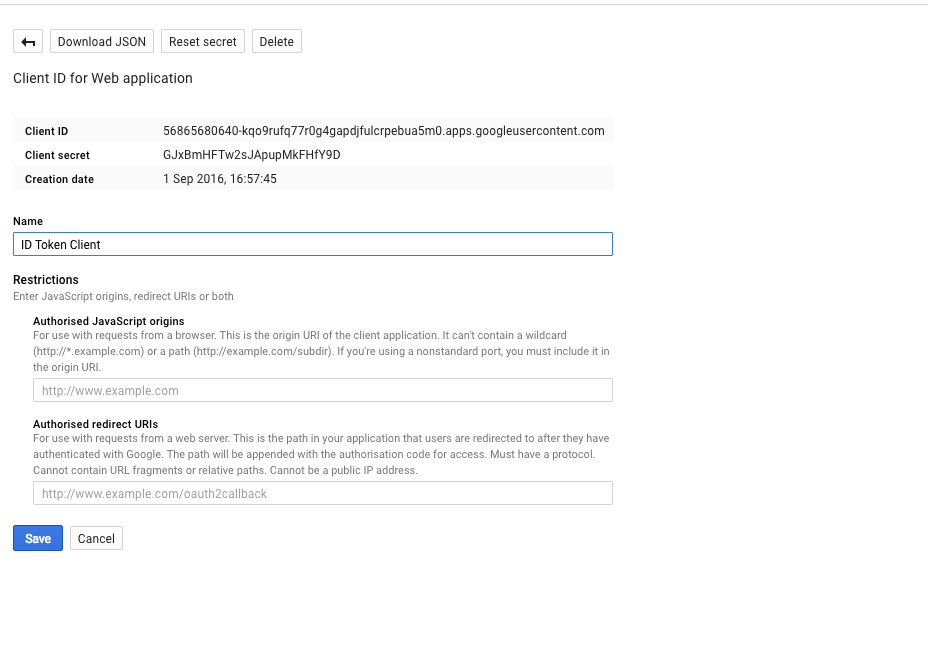 Next, back in the Firebase project, whitelist the client ID you just set for the GoogleSignInOptions in the Auth > Sign In Providers > Google section of the Firebase console. 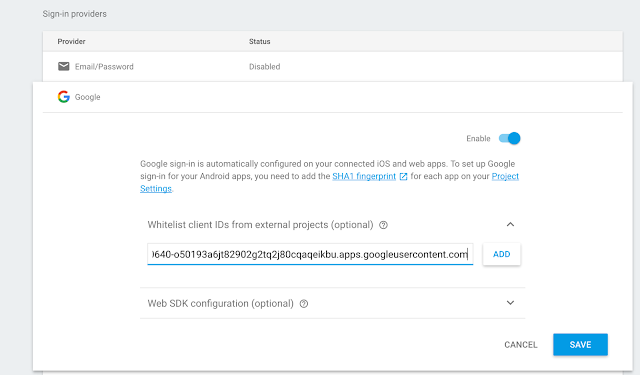 In the previous situation, we had a single Firebase project which needed to also access a Google project. That works because the APIs are separate. However, sometimes you need to access different projects using the same APIs - for example, accessing multiple database instances.

For Android apps using Firebase, there is a central FirebaseApp object that manages the configuration for all the Firebase APIs. This is initialized automatically by a content provider when your app is launched, and you typically never need to interact with it. However, when you want to access multiple projects from a single app, you'll need a distinct FirebaseApp to reference each one individually. It's up to you to initialize the instances other than the default that Firebase creates for you.
For example, to connect to the default Firebase Database instance, we implicitly use the default Firebase app:

To connect to another Firebase Realtime Database from another project, you first need to initialize a FirebaseApp instance for that other Firebase project, and give it an identifier - in this case "secondary":

Then, you can access the database using the same client APIs, but this time specifying which project you want to access by passing the relevant FirebaseApp to FirebaseDatabase.getInstance():

We can combine the two techniques above to allow sharing authentication data between Firebase project whenever you have an external ID to join on.

For example, if our app allows sign in with Google Sign-In, and we have configured our database rules in our default and secondary projects to require authentication, we can use the same Google credential to log in to both systems.

First, we set up the app for Google Sign-In on the default project as normal. Then, we get the underlying client ID from the default project. A client ID is just an identifier for a given app client (web, Android, iOS) that is usually contained within the client itself. A project can have several client IDs, but the one we need to whitelist is the one specified in the requestIdToken call to the GoogleSignInOptions builder:

You can usually find it as the first client_id with type "3" in the google-services.json. Mine was:

With that in hand, we go to the Google panel of the Auth > Sign In Providers section of the secondary project, where we can whitelist the client ID. 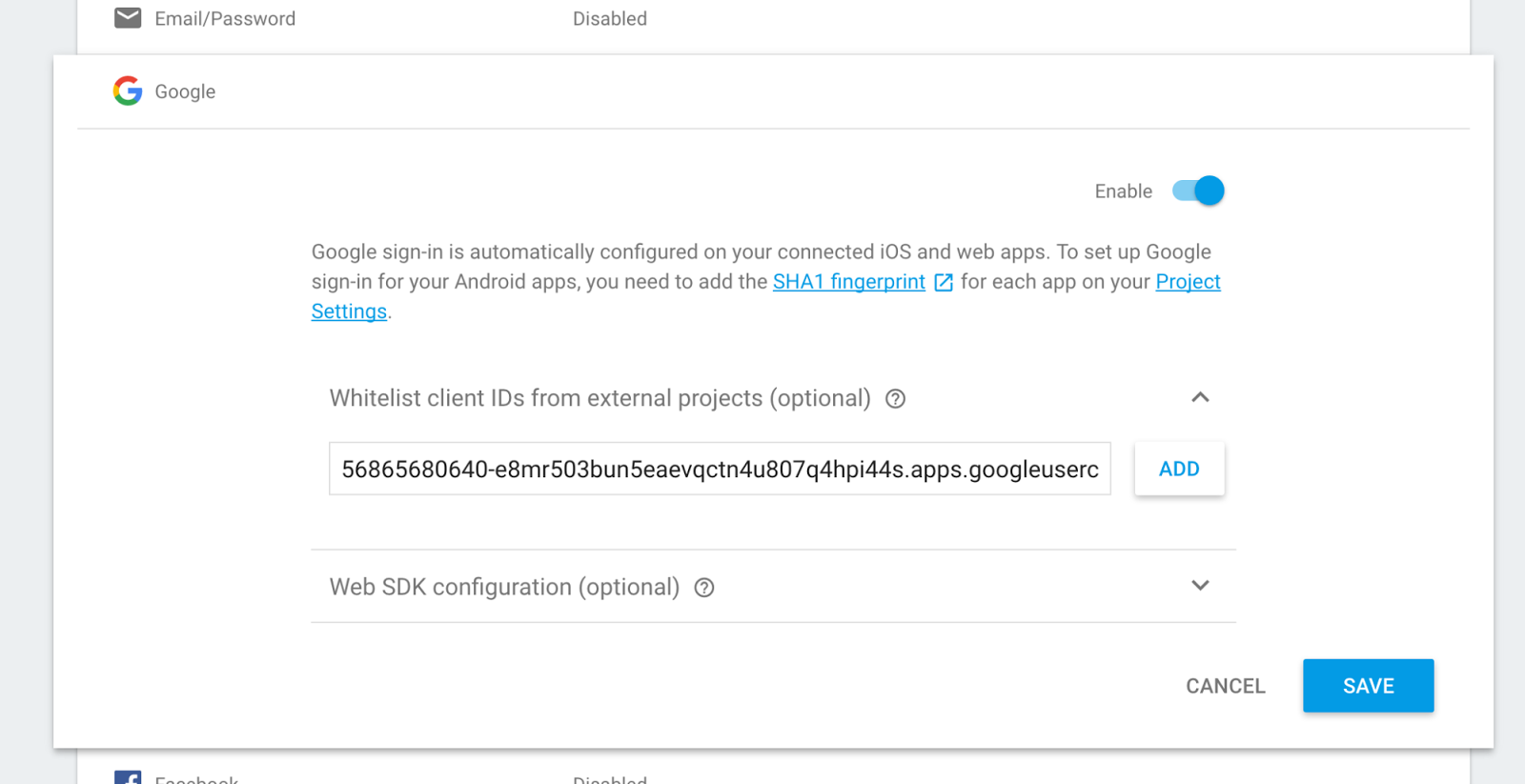 Now we can grab the same GoogleSignInAccount object from the Google Sign-In result and authenticate to both the default and secondary apps:

With one sign in from the user, they are authenticated against both projects.

One challenge here is that the Firebase user IDs on each project will be different. For example, using the same Google credential I get these two UIDs:

If the app doesn't offer account linking, we can use the Google (or Facebook, Twitter, etc.) user ID for things like database structures and security rules. However, if we need the same user ID in each project, or we're using email/password or anonymous auth, the situation is slightly trickier.

Luckily, it can be resolved using custom auth facilities, along with some server side code, since custom auth tokens get to specify their own UID!
This time, we don't whitelist anything on the secondary project, but we do download the service account for both it and our default projects. In our Android client, we first sign in and grab the Firebase ID token from the FirebaseAuth client:

Note: We can use any sign in provider we want here! We're just using the custom token to link our user IDs across projects.

We send that to our server, where we use it create a Firebase custom token. Just as on Android, we need to initialise each of our apps, though we use service accounts as we're server side (here we're using the Java server SDK, but you could use NodeJS similarly).

The primary app is used to verify the token coming from the client, and the secondary to create the custom auth token with the appropriate UID set:

Back in the Android app, we take the custom token from the server and use it to authenticate to the secondary project.

Now the Firebase uid in both projects matches.

For iOS and web as well

Hopefully, this helps offer some options for dealing with multiple Firebase projects from a single app. If you're wondering whether the same thing works on iOS and the web - it absolutely does. You just need to use the equivalent to Android's FirebaseApp to create a reference to the secondary project.

With JavaScript, you use firebase.app:

And with iOS you use FIRApp:

For more information and links, take a look at the new Configuring Your Firebase Project page in the Firebase documentation.