How do I add Firebase Analytics to an app that's already using Google Analytics?

One frequent scenario we encounter with developers is that they like the idea of using Firebase Analytics to track and understand in-app event data, but they've already spent the last several years tweaking and tuning their Google Analytics implementation just they way they like it, and aren't keen to start all over again with a brand new reporting tool.

However they're still interested in taking advantage of Firebase Analytics and some of the nifty cross-functional features it offers. Things like creating custom Audiences to use for more targeted Notifications, or creating User Properties that can be used for Remote Config targeting.

So, how do you get both working at the same time? Let's look at a few different strategies you can try if you're interested in adding Firebase Analytics to your Google Analytics-enabled app.

To make our example a little more concrete, let's assume that we've got a mobile game that is sending across these three events to Google Analytics at the end of every round: Total score, enemies beaten, and rounds survived. Our method to record these values to Google Analytics might look a little like this:

And before you ask: Yes, this could also be done using a single event with custom dimensions. The general concept is the same -- perhaps a little easier, in fact -- if that's what you're doing.

This gives us some nice little reports in Google Analytics where we can see, over time, our players' final score, enemies beaten, and the number of rounds they survived.

...but it's more natural in the Firebase Analytics world to record this as a single event with a number of custom parameters:

(And for those of you using the custom dimensions approach, this is probably even closer in line with what you're already doing.)

Going with this second approach does mean that you may want to use BigQuery to analyze the custom parameters that have been sent along with your events, but honestly, it's probably something you should be looking at anyway if you're really serious about your analytics data. And, as luck would have it, we've got a whole video all about that!

The answer here is to install Firebase not by creating a new Firebase project at the console, but by importing your existing Google Analytics-enabled project into Firebase.

When you create your Firebase project, you'll do so by clicking the "Import Google Project" button. Select your Google Analytics-enabled project, and then re-download your GoogleService-info file from the project settings. 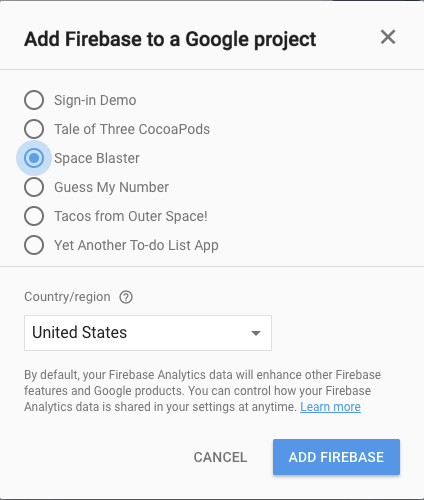 What you'll get back will be a superset of the plist file you'd get from both Firebase Analytics and Google Analytics -- if you examine its contents, you should see a TRACKING_ID entry equal to your Google Analytics tracking ID, along will a whole bunch of new Firebase info. Replace your old GoogleService-info file with this new one, go through the rest of the Firebase installation process, and you're ready to go.

On Android, the process is basically the same, except that you're looking at a .json file instead of a .plist. And probably using Android Studio instead of Xcode.

Okay, so assuming we have our project set up correctly, how do we move ahead with including our data in both Google Analytics and Firebase Analytics? Here are three options we can try.

The simplest scenario here would simply be to keep the Google Analytics service up and running, while also adding Firebase Analytics tracking to your app. The resulting code on the client would look a little like this:

Now from a developer standpoint, I could see why this kind of solution would be appealing; it's very simple to implement, and it's low risk. You don't have to worry about any disruptions to your current Google Analytics reports, because all of your client code is still there making all the same calls to Google Analytics like always. It's just that now, you're also making calls to Firebase Analytics and getting data into that system as well. 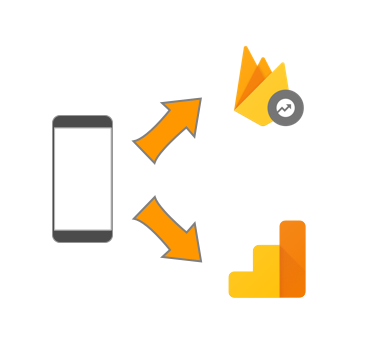 But this solution has a few drawbacks. For starters, you're now sending down data to two different analytics packages, which generally means that your client is making more network calls then before, and that means your app is using more of your user's mobile data and negatively impacting their battery life. On the other hand, Firebase Analytics tends to be quite conservative when it comes to making network calls, so we're only looking at a minor bump on top of your Google Analytics traffic.

Perhaps a bigger drawback is that you now have double the analytics code all over the place. Now, if you've already abstracted your analytics call into a separate method that hides the implementation details underneath, perhaps this isn't a big deal. You'll just now add Firebase to this one method. But if you haven't, the of idea adding all this code throughout your app probably isn't super appealing to you. So there's another option you could consider, which is…

Google Tag Manager is this neat Swiss-army-knife of tools that has perpetually been on my, "One day I should spend more time learning about this thing" list. And it turns out for good reason. One really neat feature that Google Tag Manager provides is that when it sees an outgoing Firebase Analytics event, it can help you report those same events to Google Analytics, as well as some other third party analytics providers. 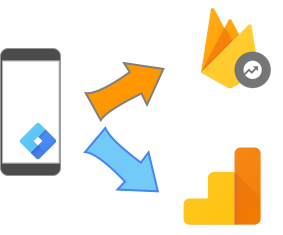 The nice part about this solution is that you only need one set of analytics-reporting code on your client. In our example, we would have a much simpler implementation where we could completely eliminate the Google Analytics calls:

To use Google Tag Manager to report these events to Google Analytics, you'd need to install the library via CocoaPods / Gradle and add a .json file to your project. And that's about it on the client side. Most of the work is done within the Tag Manager console.

Over in the Tag Manager console, you'll want to create a Firebase Event Parameter Variable for every value you'll want to send to Google Analytics. In our example, we'd need a value for totalScore, enemiesBeaten, and roundsSurvived. 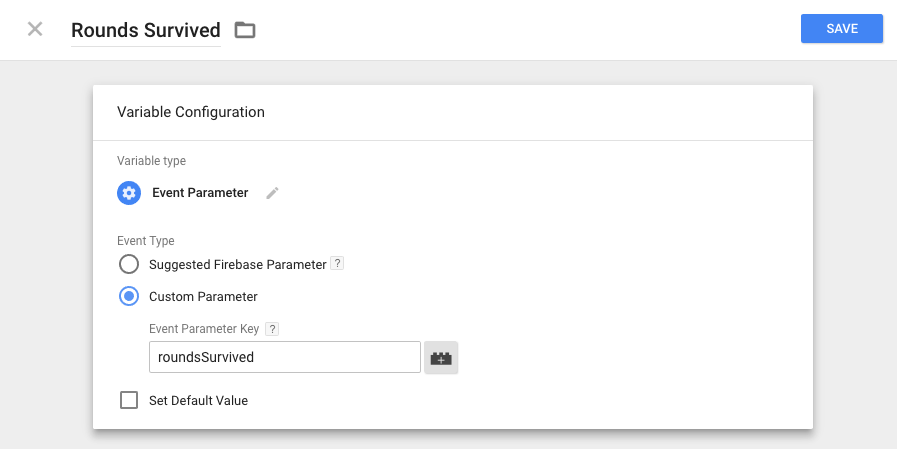 Finally, you'll create tags where you respond to these triggers by sending off events to Google Analytics (referred to as Universal Analytics within Google Tag Manager). You can also send off events to services such as AppsFlyer, Kochava, Tune, and others. 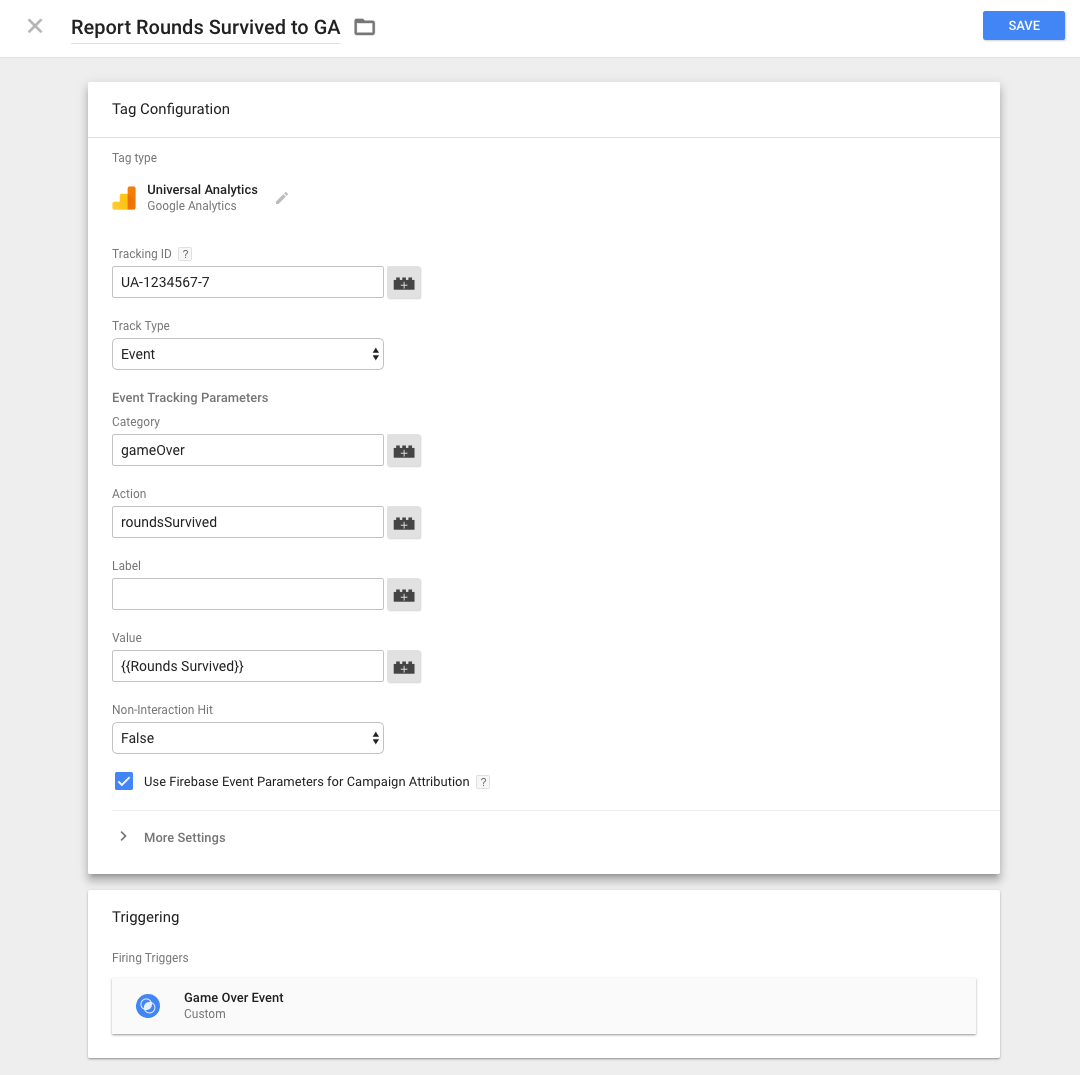 You're also still double-reporting analytics calls from the client, which, as we discussed above, isn't great. You also have to spend a chunk of time up front adding all your triggers, events and tags to the Google Tag Manager panel. But hey, I can think of worse ways to spend an afternoon.
But what if you're against the idea of running two analytics SDKs on the client? What other options are available to you? Glad you asked!

Option 3: Use BigQuery to Merge Everything

Now, granted, this solution only really makes sense if you're already a Google Analytics 360 customer and are currently using BigQuery to drive most of your custom reports. If this sounds like you, then updating your BigQuery queries to grab data from both data sources may be a reasonable option.

Going back to our example, let's assume we've already been generating a "Daily average final score" report within BigQuery by running a query that looks like this:

And then if we want to see the average enemies beaten over time, we'd need to merge the two datasets. The SQL for this might look a little something like this:

Obviously, this is a pretty simple example. Things can quickly get more complicated, depending on what you want to do and how your data is structured. But I've got some (much smarter) co-workers who are working on a blog post for the Google Cloud Big Data Blog that will cover some of these more sophisticated queries. So keep an eye out for that!